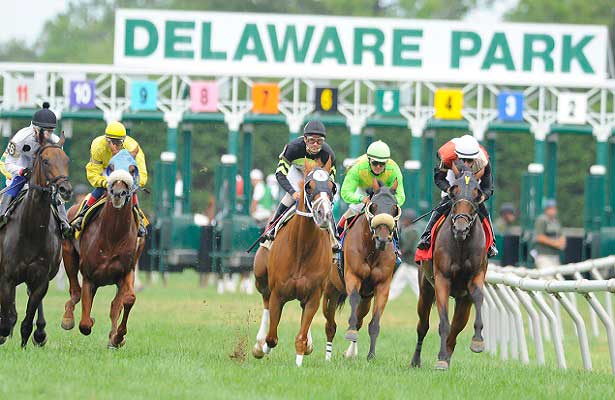 Delaware Park opened in 1937 and is the only Thoroughbred racetrack in Delaware.
Biggest stakes: The Delaware Handicap, the Delaware Oaks, and the Endine Stakes.

Also rans: Leaping for Candy, Arrogante, Phlox, Theycallmelee, Jackie's Quest, Hawaiian Talent
Fractions and final time: :24.17, :48.35, 1:13.83, 1:40.63
Winning Owner: Brown, Danny, Brenneman, Charis and Compton, Greg
Winning Breeder: Erv Woolsey & Ralph Kinder
SANTANGELO bumped with the horse to his outside leaving the gate, raced in the four and five path around the first turn, continued up the backstretch off the pace, began to move up while racing in the three path around the far turn, continued to gain ground on the outside in the stretch and pulled clear late.

Wednesday's Best Bet: Chickieness is no surprise in Small Wonder

Chickieness is no surprise in Small Wonder Stakes at Delaware Park.

Also rans: Masterful One, Lucky for Shore, Runyonesque, Cherrys Cross
Fractions and final time: :23.34, :47.94, 1:12.82, 1:39.53, 1:43.55
Winning Owner: Manuel Morales
Winning Breeder: Country Life Farm & Luisa Cuprill
BUSHWICK BRUISER saved ground around the first turn, raced off the pace on the outside up the backstretch, began a bid from the two path coming around the far turn, dueled on the outside down the lane, drifted in near the eighth pole, forcing both

Also rans: Bossyness, I Gotta Bolt, Biz as Usual, Tres Maria's Dream
Fractions and final time: :24.63, :49.45, 1:14.19, 1:39.17, 1:45.52
Winning Owner: Jackie D. Huckabay
Winning Breeder: Jack Huckabay
ALL ABOUT ME led the field while saving ground around the first turn and up the backstretch, continued to show the way coming around the far turn and drew off down the lane under a drive.

Also rans: He's a Shooter, Dr. Doyle, Imperial King
Fractions and final time: :22.11, :44.93, :57.13, 1:09.18
Winning Owner: Abrams, Ronald B. and Abrams, Jack
Winning Breeder: Red Oak Stable
POWERFULLY BUILT stalked the leader into the turn, always had the leader in his sights, moved into contention leaving the quarter pole, stayed outside rival through the stretch, cleared off late under a steady drive.

Build your bets for the Demoiselle, Remsen and Cigar Mile at Aqueduct.

Also rans: Shell Belle, Talk to the Judge, Skylar's Sister
Fractions and final time: :22.75, :45.99, :58.49, 1:11.45
Winning Owner: Black Cloud Racing Stable, LLC (Mark Esposito)
Winning Breeder: Sanford Robertson
BOUND BY DESTINY chased the leaders between horses up the backstretch, began a bid from the three path coming around the turn, kicked clear entering the stretch and drew off to the wire.

Undefeated Tuskegee Airmen faces six rivals in the 2022 renewal of the Remsen Stakes.

Wednesday's Best Bet: Chickieness is no surprise in Small Wonder

Chickieness is no surprise in Small Wonder Stakes at Delaware Park.

Build your bets for the Demoiselle, Remsen and Cigar Mile at Aqueduct.

Undefeated Tuskegee Airmen faces six rivals in the 2022 renewal of the Remsen Stakes.