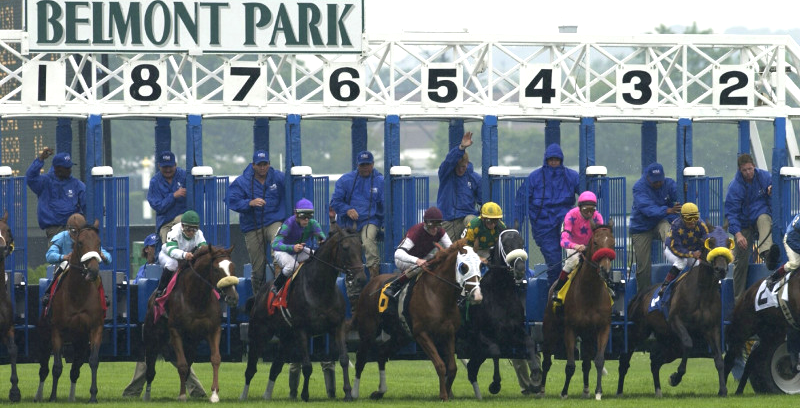 Belmont Park opened in 1905 and is home to the third leg of the Triple Crown, the Belmont Stakes. Its deep dirt track and wide turns have earned the track the nickname of "the Big Sandy."
Biggest stakes: Belmont Stakes, Jockey Club Gold Cup, Champagne Stakes, Acorn Stakes.

Also rans: Roz, Ice Kreem Sundae, Thatsjustlovely
Fractions and final time: :23.04, :46.41, 1:12.31, 1:40.15
Winning Owner: Celeritas Racing LLC and Rodriguez, Rudy R.
Winning Breeder: Gary & Mary West Stables, Inc.
U CANT HANDLE THIS broke in front while grabbed with the left-rein to correct a slight outward movement, showed the way on the inside, responded well when asked at the five-sixteenths, shook clear into the stretch, was pulled in by the rider to encourage a lead change inside the three-sixteenths and swapped to the proper lead, extended the advantage under a right-handed crop in the final furlong and proved much the best.

Here's the stakes schedule for the track's spring-summer meet.

Also rans: Nordic Light, Papi On Ice, River of No Return
Fractions and final time: :23.11, :46.67, 1:11.66, 1:37.37, 1:44.06
Winning Owner: Iris Smith Stable, LLC
Winning Breeder: SF Bloodstock LLC
ZUZUDINI was well spotted down the backstretch, drafted in the two path around the turn, shifted four wide outside the quarter-pole then was asked, gained to make an outside bid in upper stretch, lugged in some while on even terms with the runner-up, gained the advantage inside the furlong marker, continued to lug in slightly, was put to a left-handed crop late and prevailed under good handling.

Also rans: Front Man, Nicholas James, The Big Grey
Fractions and final time: :24.76, :48.63, 1:12.59, 1:35.62, 1:41.43
Winning Owner: Jordan V. Wycoff
Winning Breeder: Whiskey Hollow Thoroughbreds LLC
RICOCHET just off the pace tracking from just off the inside, tucked inside through the far turn coming under coaxing near the quarter pole, spun just off the inside into upper stretch, rallied to issue a challenge inside the final furlong taking command just inside the sixteenth marker, dug in to prevail at the end.

Byk, Hughes, Pessin & Stahl have advice on the best restaurants at and near U.S. racetracks.

Also rans: Son of a Birch, Two Minutes Apart, Funtastic Again, Cara's Prince, Alcazaba (IRE), Legal Catch
Fractions and final time: :22.05, :44.9, :56.36, 1:07.84
Winning Owner: Adam Rice
Winning Breeder: Philip Ray Robertson
OXYMORE broke very fast and went straight to the front, dictated terms while near the rail through the turn, responded well when set down into upper stretch, extended the advantage under a right-handed crop into the final furlong, powered away under the crop until just outside the sixteenth-pole then was placed under a solid-hand ride to the wire in an impressive debut.

Also rans: Mattapoisett, Twilight Dreams, Jabberwock
Fractions and final time: :22.81, :46.44, 1:11.74, 1:17.99
Winning Owner: Wise Racing LLC
Winning Breeder: Barry Becker & Judith Becker
EMPIRE HOPE coaxed from the gate, chased three paths off the inside down the backstretch before tucking inside through the turn, came under coaxing near the quarter pole and got let out angled four wide into upper stretch, came inwards towards the rail with three-sixteenths to go and had

Despite a slight decrease in field size, average daily handle at NYRA rises from 2021 to 2022.

Also rans: Don't Wait Up, Striking Speed, Unikee
Fractions and final time: :22.47, :45.04, 1:09.58, 1:16.24
Winning Owner: Caruso, Michael J. and Dubb, Michael
Winning Breeder: Fifth Avenue Bloodstock
SAINT SELBY broke in while going straight to the front, showed the way under some pressure from the outside, vied along the rail on the turn, shook clear near the five-sixteenths, extended the advantage under his own power into upper stretch then was shaken up coming to the three-sixteenths, drew off into the final furlong, was given one pop of a left-handed crop outside the sixteenth-pole then placed under a brisk hand-ride while much the best. RYAN'

Also rans: Offlee Naughty, Bluegrass Parkway, Kinenos, Tiberius Mercurius, Aviano
Fractions and final time: :23.79, :48.56, 1:12.9, 1:36.53, 1:59.36
Winning Owner: Flying P Stable and Schurman, James F.
Winning Breeder: Spendthrift Farm LLC
DYNADRIVE tracked the pace along the inside from a loose pocket early on before advancing into the pocket proper into the far turn, remained on hold in behind the leader and cut the corner into upper stretch scraping the paint, tipped out to the two path nearing the eighth pole roused and rallied to issue a challenge inside that station poking a head in front with seventy yards to the finish and prevailed kept to task.

Art Collector comes from off the pace to surprise favorites in the Pegasus World Cup.

Here's the stakes schedule for the track's spring-summer meet.

Byk, Hughes, Pessin & Stahl have advice on the best restaurants at and near U.S. racetracks.

Despite a slight decrease in field size, average daily handle at NYRA rises from 2021 to 2022.

Art Collector comes from off the pace to surprise favorites in the Pegasus World Cup.

Queen Goddess wins for first time away from home to capture the Pegasus Filly & Mare Turf.

Maryquitecontrary extends her win streak to five with a sharp win in the Inside Information.
R#
Race
x