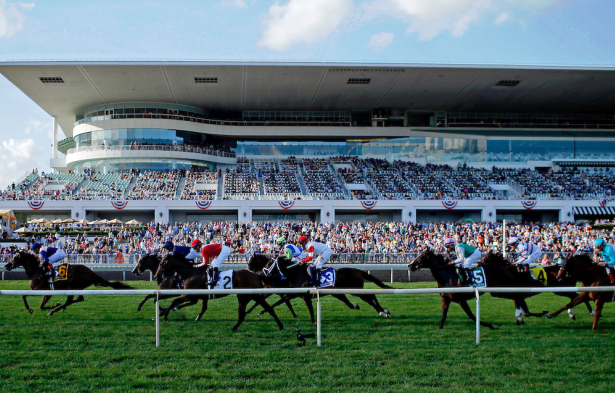 Arlington Park opened in 1927 and in 1981 became the first racetrack to host a race with a million-dollar purse, the Arlington Million. The dirt course was replaced with a synthetic track before the 2007 meet.
Biggest stakes: The Arlington Million, the Beverly D. Stakes, and the Secretariat Stakes.

Your hosts have analysis and picks for the Arlington Million and Beverly D.

Grade 1 winner Santin is among field of 9 for Arlington Million at Churchill Downs.

Flatter: It’s the 46th annual campaign to stamp out August

Flatter: How racing might be served by 46th annual campaign to stamp out August.

Ward: Sitting idle, Arlington puts its stuff up for bids

Arlington Park auctions begin Tuesday, but much of the track still looks familiar.

The first group of lots of merchandise at Arlington Park go to auction Tuesday morning.

Chad Brown returns to races, does not comment on arrest

Brown returns to training at Saratoga after his assault arrest.

Flatter: Baaeed is No. 1 in the world ... if only we could prove it

Flatter: If only we could prove Baaeed really is the best horse in the world.

Gerrymander can upset Nest in the Alabama.
x